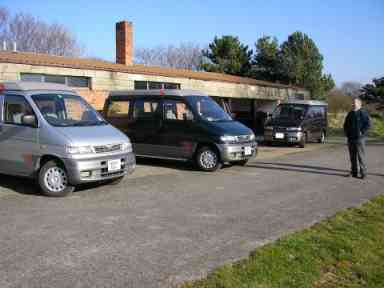 On a damp early March morning the hardy members of the NW Bongo group decided to meet up on the Wirral for a flask of soup and an exchange of information. Many thanks to Walter Smith for setting this up, and Alan Tunnicliffe for filing this report.

“I was in Ipswich that weekend but made the effort to attend so arrived a little late. I found the Wirral country park and eventually found a Bongo parked up with a note under the wiper.

Bongo owners! We are in the cafe!

I went to the cafe and asked if there was a Walter there. I was directed to an ancient person sat with his wife.

Oh s**t. It was the wrong Walter! By this time everyone in the cafe was staring at this weird person shouting at a poor old deaf man having a cup of tea with his wife. The real Walter Smith had just nipped along to the information centre.