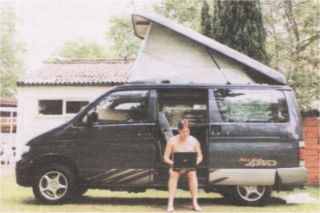 Andrew Welch (pictured above during his dinner break) is the Commercial Manager for British Naturism (www.british-naturism.org.uk). He quite obviously doesn’t live in Yorkshire! This is his tale.

In a rare idle moment I logged onto www.bongofury.co.uk a few months ago and was surprised to see myself (and my newly acquired Bongo) as the picture of the month. It was taken from an article in The Guardian about the International Naturist Youth Rally and, yes, I had no clothes on. There was some speculation in the forum about who this madman was and so I contacted Ian who suggested I explain myself in print.

For the uninitiated, naturism is simply the practice of going without clothes. (Stop sniggering at the back there!) Whatever you may think about people who do such a thing, it is not shameful, embarrassing or ridiculous, in fact when the weather is hot it’s the sensible option.

It’s good for you too – the human body was not designed to be completely wrapped up in clothes and subjected to artificial heat and light sources and air conditioning 24/7. Millions of normal people around the world have discovered how good it feels to have the sun and breeze on their skin and we feel better, more relaxed, less self-conscious and de-stressed as a result. Poor body image is improved when you realise that almost no-one has a “perfect” body.

Sunbathing and swimming are the most popular activities – there is nothing like an all-over tan, swimming in the nude is bliss and swimming costumes are among the most uncomfortable, unhealthy and pointless items of clothing there are.

Naturism is also very sociable. Naturists are happy, friendly people who are pleased to have discovered such a great way of being and treat everyone with respect, and as equals. Being among contended, comfortable and like-minded people brings about a sense of mental well-being and – despite what you may think – one quickly becomes used to being naked among other naked people. Sounds impossible? Even the most reluctant first-timers say how they “forgot” they were nude after only a few minutes and stopped noticing that everyone else was too. Also, simple nudity is not sexually stimulating – in naturist places you will find people doing what you see anywhere else, only without clothes.

It’s true that newcomers can be hesitant about stripping off in front of others for the first time. Contrary to popular belief, no-one is ever forced to undress and so people can easily experience naturism first hand even if they are not sure if it is for them. Many naturists discovered naturism by accident – often on holiday – and soon realised what they were missing. When the weather cools, naturists get dressed. Naturist places usually have indoor and outdoor facilities and many are open all year round.

Anyone can be a naturist. Background, age, shape, race, marital status, sexual orientation, creed and colour are irrelevant and it attracts people from all walks of life. At naturist places you will see babes in arms, children and teenagers right up to the elderly. There are thousands of naturist families – some into many generations – who find that they get on better with each other as they can all enjoy something together and children brought up in naturism say how they grew up without the usual hang-ups about their bodies.

Despite often unreliable weather, naturism is thriving in the UK. There are loads of places to go and whilst more luxurious accommodation can be had, naturism and camping go really well together with thousands of naturists holidaying in caravans, motor-homes or tents. My job takes me around the country and so I bought my Bongo so as to be able to stay over at events at naturist clubs and elsewhere, rather than driving home late at night, struggling to put up a tent in the rain for just one overnight stay, or paying hotel fees. There is nothing quite like waking up with the sun streaming through the roof-light and being able to get on with the day without getting dressed. Needless to say, I haven’t used my window blinds yet…

British Naturism, or “BN”, is the UK’s internationally recognised organisation for naturism and exists to unite and support naturists, to protect naturist places and provide more, make social nudity more acceptable across the UK and to provide comprehensive information on naturism around the world. Recent events include “Nudefest2007 a weekend of activities in Cornwall (a bit like Bongo Fest, I guess) with a unique evening at the Eden Project (yes, naked), a weekend at Alton Towers’ Splash Landings hotel and clothes-optional events at Abbey House Gardens, Wiltshire, and Castle Howard and York Maze, both in Yorkshire.

Naturism is not illegal in public in the UK, but society doesn’t always understand why people would go without clothes and so we have many challenges. We campaign and inform against discrimination, poor laws, Victorian attitudes and misunderstanding, and work to make the life of a UK naturist a happier and easier one as well as encouraging many more people to discover the benefits of being without clothes. Find out more at www.british-naturism.org.uk or write to BN (Dept. L07), 30-32 Wycliffe Road, Northampton, NN1 5JF, email headoffice@british-naturism.org.uk, or call 01604 620361 and ask for an information pack. Please mention this article.

So, any other Bongo Nudes out there?