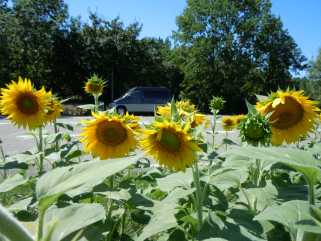 Early in October 2013 Julie contacted Bongo Mission Control to tell us that she was having a nightmarish problem with her Bongo engine.

” I bought it in April (stupidly from Ebay!) and it had a ticking noise in the engine, my local garage said it was probably the tappets so gave it an oil change and the advice was to give it a good run to see if that cleared it.

I made a weekend trip to York and all seemed ok otherwise with no overheating or other issues. The tapping noise continued. I decided to continue anyway with my planned trip to Southern Spain (quite a mission for a woman travelling alone, especially as I don’t speak French or Spanish!)

Upon reaching my final destination as a precaution, I booked it into a Spanish garage for checking over or repair before returning back to the UK. The mechanic said it has been ‘butchered’ by the previous owner so it needs some major surgery! Something to do with the cam shaft and various other related bits..the two week trip by now had turned into a month and they laughed when I said I would drive it back!

Having to return to work, I cashed in on the breakdown recovery (LV) and got a flight back to the UK and the Bongo (sob) was repatriated via transporter

Now the van is back home and I’m trying to resolve the fault either with replacement parts or a replacement engine (cant let my loyal pal go after such an amazing trip!)”

We gave Julie the relevant information, but, intriqued by her journey, we asked whether she had kept a diary or taken any photos.

Well, she certainly had, and you can download the pdf file and read here extraordinary tale!