When I bought my Bongo, two years ago it was my second camper van. I had converted the first one from a standard 8 seater layout.

This one I bought in the seven seater arrangement with a sink/ cooker/ fridge unit along the offside , the standard Bongo rear seat and a fold out bed/seat in the forward area. It had a ZIG unit and all wiring located in a large box under the rear seat.

I found it a most inconvenient and space wasting arrangement. The forward fold out seat /bed blocked access to the sink and cooker and was in fact too high to reach the same level as the rear seat when converting into a bed. (I reduced it’s height by 70mm, but it was still not satisfactory.) The Bongo rear seat made further units and storage impossible and the large box of wiring occupied all the floor space under the seat and raised questions as to what could be in it to fill such an area. So I planned some alterations.

I removed the Bongo rear seat and the forward fold out seat/bed. This yielded an excellent supply of cherry ply boards and plastic ‘T’ edging strip, both of which matched the fitted unit. I opened the wiring box by prising off the lid which had been fitted with mastic. It revealed two interesting things. First it was mainly empty space and secondly it revealed an in line fuse; the presence of which was unknown and would have been impossible to access without prising off the lid.

This yielded more cherrywood panels, edging strip and a top which perfectly matched the top of the sink/cooker unit.
I used all this boarding to extend the unit right along the offside and built in a small box at the rear for the electrics which I re-wired and which then allowed the designing of a space above it to accommodate the toilet box. 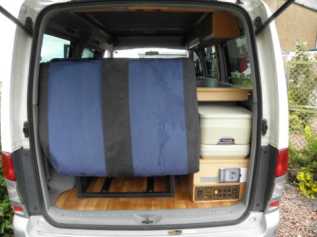 Lockers and locker lids were made and edged in the plastic trim to match the original. I made a cutter to fit my bench drill for this trim and simply ran it round the edge of each piece and pressed the T edging strip into place. The push lock fittings I bought to match the originals but I couldn’t locate any the same size so they are slightly larger. There was enough wood to make a locker above the new unit with a slightly wider door for ease of access. 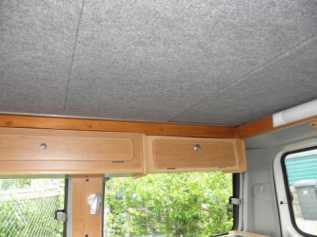 The top of the new unit, made from the lid of the old wiring box (A reminder for any one who might have dozed off) is hinged so it provides additional access to the same locker as accessed from the front panel but also reveals a cutlery drawer. 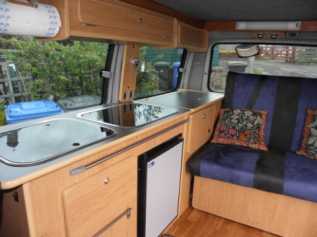 I made a fold out seat which clips to the stainless steel bar located above the small locker door below the sink. This allows seating to be on both sides of the table. This additional front locker also provides access to the gas bottle. 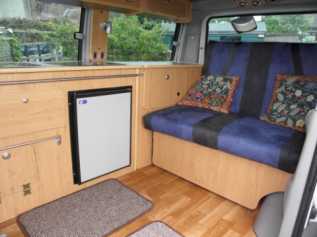 Now that the fold out seat/bed had gone I restored the small Bongo folding seat behind the passenger seat. This is most useful both for its designed purpose and also as a temporary shelf which can be reached from the driver’s seat.
All these plans had hinged around the idea of installing a rock and roll bed and before I began I had spent some time searching for a source. I came across the firm JDS Metaltech of Leeds who have a website with very useful illustrations of their products and a clear price structure. They produce full and 3’4 size rock and roll beds and anything else you may design.. They will supply cushions, (fitted with a top layer of softer foam if required) boards and fitted seat belts and offer a free fitting service. The extension runs smoothly on castors and is locked in the shut position with sturdy swivel clips.

I placed my order and elected to fit my own as I had not at that point taken out the rear seat or re-wired the electrics.
When it arrived I was extremely impressed. It was well designed, sturdily built and had an opening flap below the seat for storage.

Because I fitted it myself, which was perfectly straightforward after a little careful measuring, I was able to appreciate the accurate and substantial fitting kit supplied with the unit. I found the company very helpful and very straightforward to do business with. They don’t supply a front board for this unit, presumably because they don’t know what furniture already exists, but I had a piece of cherry board left over large enough, with a little piece glued on, to make my own.

There were one or two minor things I adapted to prevent rattles. I took the seat boards off and re-screwed them on a bed of mastic. I turned two nylon bushes for the holes where the swivel clips push through and I put spring washers on the seat belt locating bolts. All is now silent. 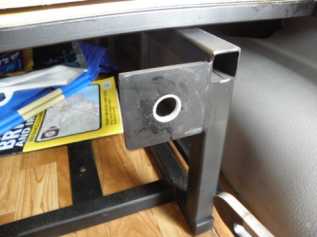 The modification to the roof is to allow easier lowering of the mushroom roof as the canvas tends to billow out when lowering and protrude from the side of the roof. I put in a round hatch but this wasn’t enough to allow the air to escape quickly enough so I cut the panel and this can be lifted to one side before the roof is fully lowered (supported on the extended pole) and gives access to the canvas to allow it to be pulled clear. 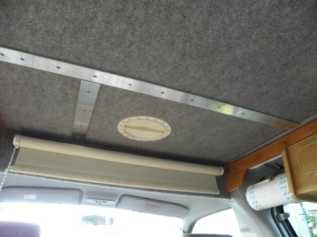 There is sufficient space above the roof panels for it to be replaced when the roof is fully lowered. It is supported by the aluminium strip on one side and the forward roof panel on the leading edge.

The arrangement has given us more space, free access to to the sink and cooker and masses more storage areas.
We could of course have bought such an arrangement from new if we had been able to examine all the layouts before buying but it doesn’t always work out like that and anyway, it’s not so interesting.