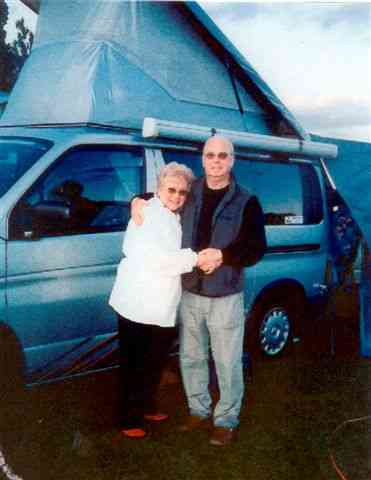 Last year we decided to do something different and had often thought about caravanning, but my husband wasn’t keen to start towing. A camper van seemed to be the answer but what a price they are!! On a journey to buy a sack of potatoes we spotted a Mazda Bongo sleeper at a third of camper price, forgot about the spuds and bought the vehicle instead. A six seater which could be used to take out the grandchildren when they visit, small enough to use generally and seats which covert to 2 single beds, an elevating roof with a mattress installed to sleep 2 people (if of course we are agile enough to get up there)! There is also electric hook up and a unit containing a small fridge, small sink and even a gas ring. Wow, we thought, just what we wanted.

We joined the Bongo club and our very first camping holiday was in a remote part of Worcestershire in May. My map reading is grade D so we invested in a Satellite map gadget, bought pump up mattresses and sleeping bags and thought that we were all set…..piece of cake!!!

Finally the car was packed and we switched on ‘satellite sam’. We would never have found our remote site without it BUT John is a little deaf and was not wearing his hearing aid (he thought that he had left it in the kitchen) so I had to relay the instructions to him. But with the road noise it was even difficult for me to hear so I spent a lot of the journey with my ear close to the dashboard. Unfortunately by the time we understood each other, he had often missed the turn off and tempers were a little frayed by the time we arrived at Stourport. Our friends Ron and Jayne had already arrived and we were able to pitch next to them and their tea was very welcome as we had a little time to calm down! John’s first job was to erect our brand new awning and as we had already had a practice run of this in the garden and colour-coded the frame joints it didn’t take too long, and with Ron’s help they heaved the awning over the frame- no way could I have helped to lift it but next the side canopy was unwound and at least I could help to fix the side panels!

It was about 4 o ‘clock before we had found a place for everything and pumping up our mattresses was hilarious. ‘Just put your foot over the valves and pump’ we were told…..what? John has a painful hip and I have 2 painful knees that need replacing but our friend came to the rescue with an electric foot pump. He blew the first one up to hard it almost burst so we had to let some air out. I felt lucky that we didn’t see two rock hard mattresses floating into the sky!!

Totally knocked out, we decided to get to bed early so struggled into the van with John’s help. He decided to sleep on a camp bed in the awning. Well…..crunch, crunch, crunch…’are you all right J?’ ‘Are you alright John?’ Crunch, crunch, crunch….Oh! Oh! The mattress was about 6″ wider than the bed and every time I turned over it clipped me in the ear ! I tried to keep very still but knees have to be moving or they seem to lock. Are you o.k. from John, about 10 feet away in the awning.

Next I needed the porta-loo which was in a small tent IN the awning. I couldn’t get down out of the back of the camper without help and John went to get up to help me down. As he got out of his sleeping bag he got the CRAMP in both thighs and was writhing about in agony. He fell backwards almost through the side of the awning, tried to keep his balance but with both legs knotted up, fell to the damp floor on his back trying to straighten his legs! I tried to rub his thighs but with limited space seemed to make things worse. It took about half an hour to get him sorted by which time we were both freezing. We donned a fleece each and tried to get a few more hours sleep, him in the awning and me in my fighting bed. Every time we heard the beds crackle we were woken up so both of us were still tired when we finally gave up and were making tea at 5.30. I donned another layer of clothes, wellies and a hat and in the pouring rain made my way with my zimmer on wheels to the toilet block, about a hundred yards way. We deflated the offending air beds and kicked them in a corner in disgust, we decided to sleep without them that night. God! I found the struggling about in and out of the camper exhausting and everything ached!! What a fun time….carry on camping!

The next day was blustery but pleasant and managed to make coffee and have a cereal breakfast. We had forgotten the milk and the bread . We had so been looking forward to bacon sarnies !! We were told that there was a Spar shop about 200 yards from the gate so John decided to make the pilgrimage by walking even though his legs were still painful from the previous night’s gymnastics. The trouble was it was about a quarter of a mile TO the gate which we hadn’t really notice when we arrived by car so he came back absolutely shattered, but still managed to drool over those sarnies.

The people on the rally were very friendly and surprisingly there were many variations of the Bongo. It was ‘visiting day’ and there was a steady stream of people interested in our experiences and our version of the vehicle. We met some interesting folk from Bournemouth, Newquay & Poole. A couple from New Romney lived in the same road as we resided in l986. Plenty of laughs about experiences and lots of interest in our awning, one of the few remaining secure after a particularly fierce rain and wind storm. We decided that we had a bargain with our ‘spec’ and we were told how lucky we were to have such creature comforts—we hadn’t noticed !!!

In the afternoon we sat in our awning watching the other l30 vehicles arrive!! We didn’t need the TV as it was so entertaining to see that others had a hilarious time trying to erect their tents and awnings in a force 9 gale!! One gazebo, quite inadequate, was swaying so violently the poor folk couldn’t keep it still long enough to attach the side panels!! We noticed later that they were missing and had gone into Kidderminster to buy a tent. This was a little more successful once the wind had dropped…ever erected a tent for the first time in lashing rain? Not to be recommended but good fun for the observer!

Next day a trip to the safari park had been arranged (we gave up on this one). Three large coaches arrived on site and left in brilliant sunshine. We used this time to clear up and have a luxurious shower and had a cup of coffee in a very civilised way with our friends. We were thankful OBSERVERS of their return in one hell-of-a thunderstorm and we watched as nearly a hundred poor campers ran across the field to their rain soaked canopies in their rain soaked clothes to seek dry comfort in their camper vans. Some canopies had sagged with the rain (don’t try to push the middle up as we had done) the trick is quite simply to let one leg support down slightly and get out of the way at the same time.

We had a more comfortable night both sleeping on the folded back seats inside the vehicle and slept warmer, perhaps because we went to bed fully clothed with a gillet and a fleece on top and everything we could lay our hands on over us!!! (What fun – carry on – more camping).

Next day was uneventful and we got to know some really interesting people. We observed that one couple were taking yet another walk around the beautiful site with their inner arms linked and their outer arms almost fully extended outwards. We decided that they must have had an accident and somehow broken their opposite arms..no! In their tent they had two cages which housed their pet rats and they were taking them out for air INSIDE THE ARMS OF THEIR JACKETS!! Ugh! … but they were very nice people and chatted to everyone. Another camper had an entertaining parrot and people were visiting her van in a constant stream encouraging the pet to speak.

That night we thought it was a little warmer and John decided to sleep on the camp bed again, this time without the pump ups. But when I struggled out of bed in the morning I found him lying at an angle of 45 degrees and hanging on to the sides of the bed. It seemed that when he fell out with the cramp, he had broken one leg of the bed but he was still trying to lie still in the hope that it wouldn’t give way completely…..something else that just had to go before next time (next time???).

The last evening was a great success. A barbeque for about 400 was so well organised and it was created by members all under the canvas of 3 gazeboes. How they managed it dodging the frequent downpours I will never know but the evening improved and the concert began. Ron played his keyboard as best he could without music and without amplifiers who could hear it anyway! I had one book of music, didn’t know his instrument but he set it up to quickstep or foxtrot and I did my best which was pretty awful but no one could hear that either. In the middle of a field it was all a bit of a wasted effort. However the host at the site had a great voice and even greater sound amplifiers so with her and one other girl’s great voices we had a really good time despite my sitting in my wheely zimmer, frozen stiff wrapped up with every bit of warm clothing I could find . A final downpour ended the evening rather suddenly and we all scurried back to our ‘pods’.

Next morning was the great exodus, everyone saying their goodbyes and ‘see you at the next event’ (Oh no you won’t!)

It took 2 hours to get wound down and packed up and our friends left before us as we were going on up country to see our grandchildren in Yorkshire. We started up switched on satellite sam and……nothing ….dead as a dodo. Whatever we did couldn’t bring him back to life and by this time we were both really shattered so we decided we had more chance of finding our way back home to Colchester. As I’ve already said I won’t get an oscar for my map reading and we lost our way several times on our way home. As we thankfully opened our front door to unload five hours later a stray dog excitedly ran in the open door, peed in our hall, ran round and round the kitchen doing more of the same and we finally managed to catch her and put her in the garden ………..THAT SAYS IT ALL….happy camping!!!!!