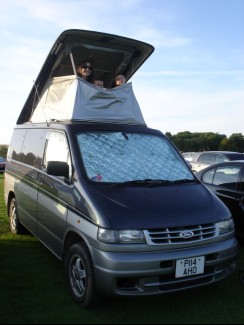 Birth in the Bongo

As we all know, Bongos are very versatile vehicles. But no-one could have envisaged this! Sent in by the Jewell family.

“We thought it about time that we share our Bongo story and wonder if anyone else has had a similar experience.

When our first son was born the Bongo provided an excellent form of transport to the hospital, with plenty of space in which to get comfortable whilst in the throes of labour. Harry was born many hours later under the expert help and guidance of the midwives at The Princess Anne Hospital, Southampton.

Three years later, baby boy number 2 decided he was coming in to the world a week early and so, whilst mummy did what she had to do, daddy made sure the Bongo was duly prepped and ready to go at a minutes’ notice. At approximately 04.45 on the 10th December 2008 the Bongo was put into action once again, this time en route to the Royal Hampshire County Hospital, Winchester as we had decided it was marginally closer to our new home than Southampton. The journey would normally take about half an hour, but with it being early morning, and dad on a mission, we got there in a record 20 minutes. However…. the baby only took 15!

Dad parked up outside the maternity unit, transferred to foot and beat a more conventional labouring couple to the door buzzer to announce our arrival in the car park. Or should that be ‘Sam’s arrival’, as by the time they slid open the door, there was mum already holding the baby!

By far the lengthiest part of the experience was waiting for the hospital staff to complete the paperwork so that we could go home. However, we have kept their notes stating ‘born in transit’ as a fond reminder of the occasion, but personally think ‘born in Bongo’ has a better ring to it!

The Bongo is now affectionately known as Bertha, and her sentimental value will always outprice her retail value … (even though she’s actually a Ford Freda!).