Technical questions and answers about the Mazda Bongo

Hello, long time lurker here but never posted.
So ive had my Bongo for 4 years now and until last camping season i didn't realise that when on site the leisure battery doesn't have a charger when we are on EHU (id never thought about it till we had a flat battery after 5 days)
Id like to install a battery charger with a control/voltage display panel that would be ok with the current 100w solar panel but with so many options out there I though see what others have and what advice i can get.

Zig Marque 1 on eBay https://www.ebay.co.uk/itm/Zig-Marque-1 ... SwVqpelVzJ There are all some other look a like panels around as well.

Mine is connected thru a ZIG marque 1 panel which has a voltage display and in parallel with a solar system. 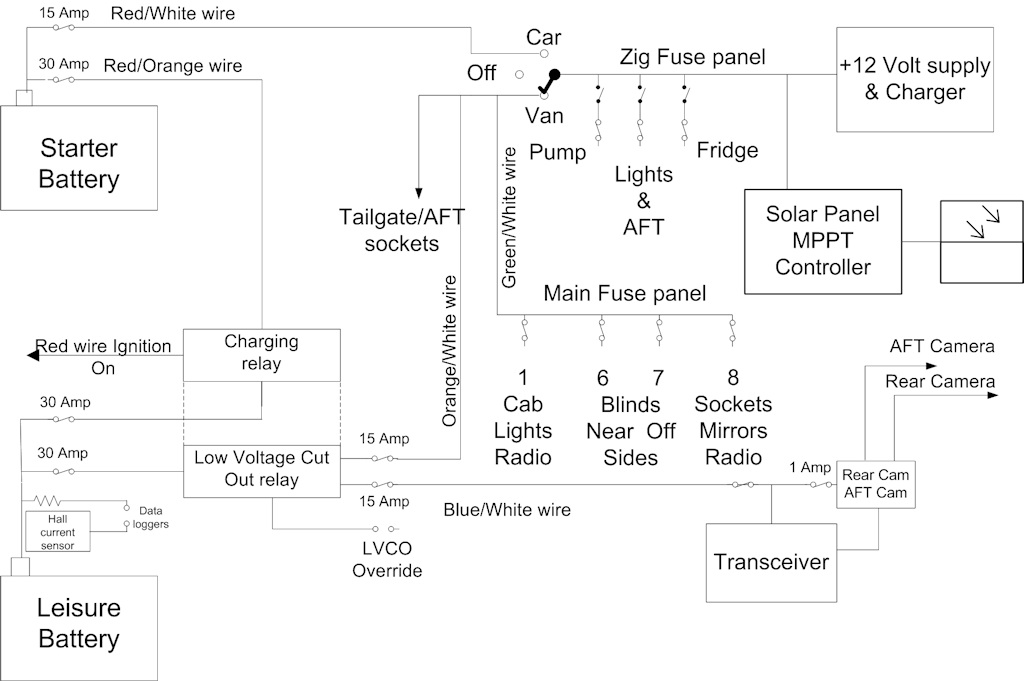 Most systems will only give a very rough indication of capacity left especially with solar. The answer is to fit a battery meter which is fitted between your battery and the rest of your system. When set up they literally count the amps in and out and can give you a very good indication of the power available. You then have to remember most leisure batteries should not be discharged below 50% though some of the more modern batteries claim to be able to discharge below 50%.
White diesel Bongo
Top

There are other better ones at even more extreme prices!
Geoff
97 V6, AFT, full side conversion.

I also recommend BM-1, I use them and I have no problems with them so far.
..
Top

Hi I've just bought a 1995 bongo Friendee and am trying to get everything running as it should.
I wonder if you can help me regarding my leisure battery and charging.
Here's the issues I've discovered:
80A fuse on positive wire to/from LB has blown. I've ordered some more but want to know why it blew.

There is a cigar lighter connection hanging out of the dash alongside 3 leds, coloured red, yellow green. Any idea what that could be about?
The second hand car dealer I bought the van from said it was "somthin to do with charging the leisure battery".

The rear cigar lighter/socket is dead, but the one of the dash has power.

One other item is the gear box oil dipstick, is reading on the minimum mark, does it need more?

I thinks that's all for the mo, really appreciate your wisdom
thanks
Top

One of the most common causes of popping the charging fuses is that the LB has been left to discharge badly and then the engine is started and revved before pulling away, the voltage sensitive relay has promptly switched over, the alternator will quite happily try to put 90+ Amps thru the charging fuses, pops them. Always replace BOTH fuses as they are in series each protecting the cable from its battery so both were melting and one beat the other so the other is damaged.
If the LB ever goes flat then it needs charging to a sensible level (if it hasn't been damaged) so that there isn't the massive in-rush current when the relay closes.

The LED's are probably a "meter" to show state of battery charge on the LB connected to the sockets.

Gearbox oil level has to be measured the correct way, engine running, gears moved thru to ensure that the oil is well distributed and up to temperature and then measured with engine still running to keep the Torque Convertor filled, needs dipping a few times as its very splash prone and fiddly to read.
Geoff
97 V6, AFT, full side conversion.

Welcome aboard, and, as always, great info from Geoff.

In the back of my mind I have an idea that the gearbox dipstick showing minimum, while cold, is a rough starting point before checking correctly as Geoff has said, so sounds about right.

Thanks Geoff, really appreciate your advice

I've ordered some new fuses and I'll charge up the LB.

I put a multi meter on it and it was about 8v.

Many thanks
P
Top

Any idea how long its been very low ? As much more than a week or two and there will be damage to the plates.
Geoff
97 V6, AFT, full side conversion.

Hi It was probably low for several months.
I charged it up to 12v on a mains charger and changed the fuse ( there was only one that I could find)
However when I started the van and plugged in the cigar socket none of the three lights (Red, yellow green) light up

You really need to get the battery checked in that case it sounds as if its been damaged for too long.
Geoff
97 V6, AFT, full side conversion.

Thanks Geoff, can I test myself with my multimeter?